The great demand for stationary, static internal combustion engines forced Karl Benz to enlarge the factory in Mannheim, and in 1886 a new building located on Waldhofstrasse (operating until 1908) was added. Benz & Cie. had grown in the interim from 50 employees in 1889 to 430 in 1899.

During the last years of the nineteenth century, Benz was the largest automobile company in the world with 572 units produced in 1899.

Because of its size, in 1899, Benz & Cie. became a joint-stock company with the arrival of Friedrich von Fischer and Julius Ganß, who came aboard as members of the Board of Management. Ganß worked in the commercialization department, which is somewhat similar to marketing in contemporary corporations.

The new directors recommended that Benz should create a less expensive automobile suitable for mass production. In 1893, Karl Benz created the Victoria, a two-passenger automobile with a 2.2 kW (3.0 hp) engine, which could reach the top speed of 18 km/h (11 mph) and had a pivotal front axle operated by a roller-chained tiller for steering. The model was successful with 85 units sold in 1893.

In 1896, Karl Benz was granted a patent for his design of the first flat engine. It had horizontally opposed pistons, a design in which the corresponding pistons reach top dead centre simultaneously, thus balancing each other with respect to momentum. Flat engines with four or fewer cylinders are most commonly called boxer engines, boxermotor in German, and also are known as horizontally opposed engines. This design is still used by Porsche, Subaru, and some high performance engines used in racing cars. In motorcycles, the most famous boxer engine is found in BMW motorcycles,[citation needed] though the boxer engine design was used in many other models, including Zundapp, Wooler, Douglas Dragonfly, Ratier, Universal, IMZ-Ural, Dnepr, Gnome et Rhône, Chang Jiang, Marusho, and the Honda Gold Wing.

Although Gottlieb Daimler died in March 1900—and there is no evidence that Benz and Daimler knew each other nor that they knew about each other's early achievements—eventually, competition with Daimler Motoren Gesellschaft (DMG) in Stuttgart began to challenge the leadership of Benz & Cie. In October 1900, the main designer of DMG, Wilhelm Maybach, built the engine that would later be used in the Mercedes-35hp of 1902. The engine was built to the specifications of Emil Jellinek under a contract for him to purchase thirty-six vehicles with the engine, and for him to become a dealer of the special series. Jellinek stipulated the new engine be named Daimler-Mercedes (for his daughter). Maybach would quit DMG in 1907, but he designed the model and all of the important changes. After testing, the first was delivered to Jellinek on December 22, 1900. Jellinek continued to make suggestions for changes to the model and obtained good results racing the automobile in the next few years, encouraging DMG to engage in commercial production of automobiles, which they did in 1902.

Logo with laurels used on Benz & Cie automobiles after 1909 Benz countered with Parsifil, introduced in 1903 with a vertical twin engine that achieved a top speed of 37 mph (60 km/h). Then, without consulting Benz, the other directors hired some French designers. France was a country with an extensive automobile industry based on Maybach's creations. Because of this action, after difficult discussions, Karl Benz announced his retirement from design management on January 24, 1903, although he remained as director on the Board of Management through its merger with DMG in 1926 and, remained on the board of the new Daimler-Benz corporation until his death in 1929.

Benz's sons Eugen and Richard left Benz & Cie. in 1903, but Richard returned to the company in 1904 as the designer of passenger vehicles.

That year, sales of Benz & Cie. reached 3,480 automobiles, and the company remained the leading manufacturer of automobiles.

Along with continuing as a director of Benz & Cie., Karl Benz would soon found another company, C. Benz Söhne, (with his son Eugen and closely held within the family), a privately held company for manufacturing automobiles. The brand name used the first initial of the French variant of Benz's first name, "Carl". 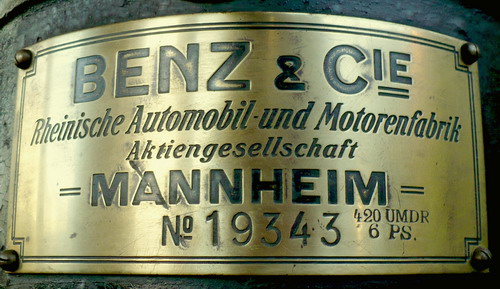