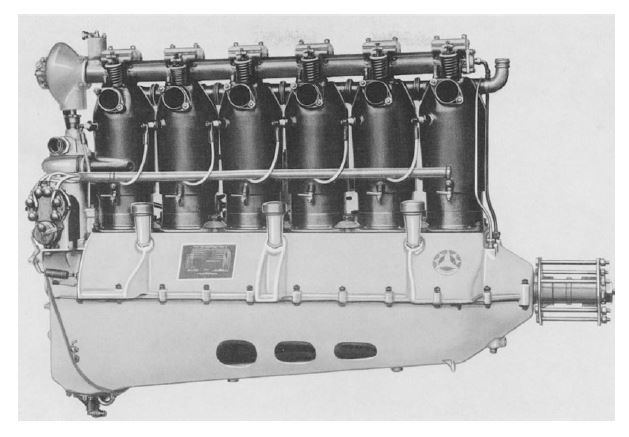 With over 12,000 units produced, the D III and further developed D IIIa recorded the highest production volume of all aero engines during World War I. The reasons for the great military demand were the engines high level of reliability and its advanced design. Among other things, the 6-cylinder inline engine featured steel cylinders and an overhead camshaft wih a vertical shaft drive.

Featuring single cylinders enveloped by water jackets this was the first of the series of well known Daimler aero engines. A key identifier (from the D IIIa) is the water pumps position midway up the vertical drive shaft at the rear of the engine

The Mercedes D.III, or F1466 as it was known internally, was a six-cylinder, SOHC valvetrain liquid cooled Straight-six engine aircraft engine built by Daimler and used on a wide variety of German aircraft during World War I.The initial versions were introduced in 1914 at 160 hp, but a series of changes improved this to 170& hp in 1917, and 180 by mid 1918. These later models were used on almost all late-war German fighters, and its only real competition, the BMW III, was available only in very limited numbers. Compared to the Allied engines it faced, the D.III was generally outdated.

The D.III was based on the same pattern as the earlier Mercedes D.II, suitably scaled up for higher power settings. Like most inlines of the era, it used a large aluminum crankcase as the main structural component, with separate cylinders made from steel bolted onto it. The technology for screwing a threaded cylinder of steel into an aluminum crankcase did not exist at that time. Jackets for cooling water covered the top 2/3 of the cylinder, feeding a radiator via connections at the back of the engine.

The D.III featured a rather prominent Overhead camshaft operating the single intake and exhaust valves, powered by a shaft running up from the crankshaft at the rear of the engine. Ignition was provided by two sets of spark plugs, one located on either side of the cylinders, each powered by a separate ignition magneto for redundancy. The ignition cables were protected in tubes running down either side of the cylinders. Fuel was fed into the cylinders via pipes on the left side of the engine as viewed from the rear, supplied from a twin-barrel carburetor located just above the crankcase. Both the fuel and oil reservoirs were pressurized by an air pump run off the crank.

The only obvious design change from the earlier D.II was to use separate cooling jackets for each cylinder, whereas the D.II used one jacket each for a trio of adjacent pairs of cylinders. Daimler also used the pistons of the D.III to produce the reduction geared, eight-cylinder 220 hp Mercedes D.IV during this period, but it did not see widespread use. The lengthened crankshaft of the D.IV proved prone to breaking.

The original D.III was introduced in 1914. While it saw widespread use in early examples of the C-series of two-seat general-purpose biplanes, the D.III was too large for contemporary fighter designs and did not see use in that role. At the time, fighters were generally powered by lighter rotary engines of power output levels from 80 to about 110 hp, or by water cooled inline engines in the 100 to 120hp range such as the earlier Mercedes D.II. By 1916 new designs had grown in size and performance and the D.III became popular on new designs. By 1917 the D.III was being widely used in fighters, most notably on the famous Albatros D.I. Production of this version was essentially wound down by May 1917, with only a handful continuing to be delivered until October. British hp ratings being slightly different to the German PS or Pferdestärke standard, it is probable that this engine would have had a slightly higher rating under British HP numbers.

Development of the basic design led to the slightly modified 170 hp D.IIIa, which took over on the production lines in June 1917. The main change was to change the piston profile to have a flat head instead of the former concave one, thereby slightly increasing maximum compression. Other changes were mainly in design details, notably a redesigned crankcase and new carburetor. Many of the accessories were also redesigned or moved around on the engine. This model was produced only briefly, for use on the Albatros D.III but there are indications that possibly some early Albatros (Alb.) made Fokker D.VII's were also equipped but probably had the engines upgraded or replaced as quickly as possible. This engine has been referred to in postwar British analysis as generating 180 hp.

A more "radical" upgrade was the 180/200 hp D.IIIaü, introduced in late 1917, the D.IIIaü was a standardized refinement of the D.III and D.IIIa design and the ü designation was never official. This engine changed the pistons again, this time to a domed profile that further increased the maximum compression – the ü was for "über", meaning "overcompressed". Additionally, a new altitude-compensating carburetor was added, which improved performance at higher altitudes. To support operations at these altitudes, water from the radiator was used to heat the air intake and prevent icing in the carburetor. The aü model, which included upgraded D.III and D.IIIa engine blocks, was the most prolific German fighter engine of 1918 and designed into most fighter designs from late 1917 on. This included most of the entries in the First Fighter Competition at Adlershof in January 1918, notably the famed Fokker D.VII. In British post war evaluation the D.IIIaü demonstrated 200 hp according to the British standards.

A final version attempting to keep the D.III block competitive was the 200 hp (200-217 hp) D.IIIav (or avü), introduced mid-October 1918. The av used slightly longer pistons made of aluminum (possibly a first for a production engine), increasing the compression yet again, while at the same time allowing them to move faster due to the reduced weight. The maximum allowable RPM increased from 1,400 in the earlier models to 1,600 in the av, accounting for most of the gains in power. It is unclear if any av's saw service use. The increased use of Benzol in German aviation fuel may have helped this final upgrade of power, its higher octane rating being better suited for the higher compression ratio.

Details of the original SOHC valvetrain for the German Mercedes D.III - note the rocker arm emerging from the "rocker box" through a slot in the box's side.

All of the D.III series were generally very similar to other models, with the exception of the piston profile, carburetor details and valvetrain details. It appears that upgrades were available for many of the engines, certainly for the III to IIIa, and IIIa to IIIaü. It would seem unlikely that early III's would ever make it to the IIIaü standard, as they would almost certainly have been worn out in service before then. The valvetrain changes concerned the layout of the rocker arms that operated the valves. Early models had square cases positioned directly over the cylinders with the rocker arms exiting through vertical slots cut into the sides of the boxes, as shown at left.

The earlier "side-slot" rocker arm design had also been used for the Mercedes D.I and D.II engines' valvetrains. In later versions of the D.III engines, the boxes were relocated rearward on the tubular camshaft housing, and the cylindrical rocker arm shafts protruded forwards through the front surfaces of the boxes, operating the now fully exposed rocker arms with the exposed shaft ends, as shown at right.

The newer arrangement was stated as being interchangeable as a set with the complete camshaft, rocker boxes, rocker arms and valve springs, with the D.III's earlier "side-slot" cam drive system design.

Confusingly, the "ü" was not an official part of the name. This leads to a number of problems in various references, which often confuse the IIIa with the IIIaü, listing the former as a 180 hp engine. It should also be noted that there are two D.IV engines, one the eight-cylinder based on the D.III pistons, and the later six-cylinder D.IVa which was essentially unrelated.

The D.III line of engines would find themselves eclipsed in performance by the BMW IIIa of 185 and then 200 hp (British rated it at 230HP) in 1918, however, the small number of BMW's produced ensured that the Mercedes D.III series would be the primary German fighter engine up to the last month or two of the war and it would still be seen in very large numbers even at the end. At the end of the war the D.IIIaü would still be the numerically predominant German fighter engine. As a result the Fokker D.VII's (those not equipped with BMW IIIa's) and the Pfalz D.XII's would be engine limited in performance (as opposed to "airframe-limited") and yet would still be formidable adversaries to their Allied counterparts. The D.IIIaü was considered the optimum engine for the Roland D.VI, Pfalz D.IIIa, and Albatros D.Va fighters whose airframes were of an earlier, "all-wood" generation in design.

Mercedes F1466
Company designation for the D.III
D.III
The original production version directly developed from the Mercedes D.II developing 150 - 160 hp
D.IIIa
An up-graded D.III introduced in 1917 rated at 170 hp
D.IIIaü
An unofficial designation, (ü for über), for D.IIIa engines with domed pistons, operating "over-compressed", (at a higher compression ratio). These engines were not able to operate at full throttle at sea level, utilising a self compensating carburettor. 180/200 hp
D.IIIav
D.IIIa engines with the domed pistons made from Aluminium alloy giving the higher compression ratio as well as a higher operating rpm and thus more power. 200 hp (200-217 hp)
D.IIIavü
alternative unofficial designation for the D.IIIav